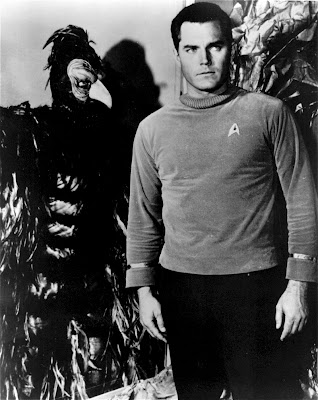 It's a matter of common knowledge that NBC rejected Star Trek's pilot episode, 'The Menagerie,' in 1965. It's also well-known that the network followed that decision with the unusual move of ordering a second pilot episode, 'Where No Man Has Gone Before,' which was produced that same year. What's perhaps less clear is why would-be series star Jeffrey Hunter departed the series after 'The Menagerie' failed to sell.

Unfortunately, Hunter died in 1969, taking the answer to that enigma with him. What can be cleared up, however, are the circumstances of the actor's departure from the series, which have been the subject of various and contradictory accounts over the years.

In 1993, William Shatner (with co-writer Chris Kreski) published his remembrances of the production of the original Star Trek television series. He had this to say about Hunter's departure (which, of course, took place before he was hired to be Hunter's replacement):


In truth, Hunter wasn't so much "unable to commit to the series" as he was fired.

Apparently there were problems with Jeffrey. Not while he was shooting or on the set or anything like that, but afterward. They started when the go-ahead came in for the second pilot, and Hunter's wife, who was an ex- model, suddenly started coming to production meetings. Evidently she hated the first pilot, and as a result she began to frequently storm into Gene's office, loudly making demands like "from now on, my Jeff must only be shot from certain angles," and apparently it became "Jeff wants this" and "Jeff demands that." Gene later told me that he'd much rather be dealing with Jeff and his agent, or even Jeff and a gorilla, than Jeff and his wife. He continued that there were so many tantrums, restrictions and ultimatums being laid out on the table that he finally thought, "Well, I can't possibly do an entire series like this. They'll drive me nuts."

In 1995, Leonard Nimoy published his own Hollywood memoir, with a particular emphasis on Star Trek. Although less elaborate than Shatner's version, the principal details of his account of Hunter's departure are very much the same:


In fact, [Spock] became the only character to survive from the first pilot to the second, because Jeff Hunter was let go when his wife began to represent him and made what Gene [Roddenberry] considered excessive demands.

Contrary to the version told by Shatner and Nimoy is the one found in 1996's Inside Star Trek: The Real Story, which was co-written by Herbert F. Solow and Robert H. Justman:


We had an option on Jeff Hunter for a series, but not for another pilot film. The idea of a network financing a second pilot film after the first one failed to result in a "sold" series was unheard of, so there was no reason for such a contract provision. We therefore had to devise a plan that would enable us to keep Jeff Hunter in the fold.

In the eyes of the New York and Los Angeles television world, Star Trek was already a failure. But we knew differently and looked forward to running the completed pilot for our star, Jeff Hunter. We hoped it would convince him to do another pilot. Gene and I waited in the Desilu projection room for him to arrive. He never did. Arriving in his stead was actress Sandy Bartlett, Mrs. Jeff Hunter. We traded hellos, and I nodded to Gene. He flicked the projection booth intercom switch. "Let's go."

And so it went. As the end credits rolled, and the lights came up, Jeff Hunter's wife gave us our answer: "This is not the kind of show Jeff wants to do, and besides, it wouldn't be good for his career. Jeff Hunter is a movie star." Mrs. Hunter was very polite and very firm. She said her good-byes and left, having surprisingly and swiftly removed our star from our new pilot.

Which version is correct? In this case, the story as told by Solow and Justman is almost certainly the correct one.

Although Jeffrey Hunter's contract doesn't survive in the Star Trek television series collection held by the University of California, Los Angeles, the contracts of all five of his co-stars in 'The Menagerie' are publicly accessible there.  The financial details of the contracts with Majel Barrett, Peter Duryea, Laurel Goodwin, John Hoyt, and Leonard Nimoy have slight differences, but their broader agreements are all the same.  Each actor was contracted for a pilot episode (in this case, 'The Menagerie') and each had an option for five years worth of regular episodes (a contract which could be renewed or terminated after every thirteen episode production cycle).  None had a provision for the possibility of a second pilot episode, which is why Leonard Nimoy had to sign a new contract on June 2, 1965 when the producers brought him back as Mr. Spock in 'Where No Man Has Gone Before.'  In other words, there's no way Roddenberry could have fired his original leading man. Hunter was a free agent, and fully within his rights when he walked away from Star Trek.

An April 5, 1965 letter to Hunter from Roddenberry confirms that it was Hunter's decision to not continue with the program:


I am told you have decided not to go ahead with Star Trek. This has to be your decision, of course, and I must respect it.

You may be certain I hold no grudge or ill feelings and expect to continue to reflect publicly and privately the high regard I learned for you during the production of our pilot.

It is unclear if Joan 'Dusty' Bartlett (not Sandy, as reported by Solow and Justman) influenced Hunter's departure from Star Trek, or if she was just the messenger. Whatever Bartlett's role in that decision, her say over Jeffrey Hunter's career wouldn't last. By late 1966, Hunter told the fan magazine Modern Screen he was pressing for a divorce, and in February of 1967 their marriage was over. Unfortunately, so was Jeffrey Hunter's career as a movie star. After his work on Star Trek, Hunter starred in a few B-movies and made a handful of guest appearances on television, but he never approached the heights of his career during the late fifties and early sixties.  In 1969, he suffered a cerebral hemorrhage, fell, and died during surgery.

Historian's Note: At some point in the seventies, fans began referring to the first pilot by its pre-production title of 'The Cage' to differentiate it from the two-part, season one episode, 'The Menagerie,' which incorporated footage from the unsold pilot.  The earliest example of this I have been able to find is David Gerrold's book, The World of Star Trek, published in 1973, although it's possible the tradition began earlier, when Gene Roddenberry began screening the episode during speaking engagements on the college lecture circuit.

Update (6/24/2013): Thanks to Trek BBS user Gary7, I have added the letter from Roddenberry to Hunter, which can be found in David Alexander's biography of the writer-producer, as well as the Roddenberry papers at UCLA.

'He Wanted a Divorce for Christmas,' Modern Screen (1966)