The number of web pages and fanzine articles Star Trek fans have devoted to justifying and explaining the franchise's "stardate" system is incalculable. I won't attempt to step on their toes here; rather, I am interested in the behind-the-scenes history of the stardate system on the original Star Trek television series.

Here's the history of the stardate system according to a magazine authorized by Paramount Pictures to promote the thirtieth anniversary of the franchise in 1996:

Few Star Trek topics generate as much heated debate as the stardate system, the time calculation used by the United Federation of Planets which was introduced to the classic series by Gene Roddenberry, who borrowed the notion from the Julian date currently used by astronomers. Developed by Joseph Justus Scaliger (who named his dating system after his father, Julius Caesar Scaliger), the Julian time calculation measures the number of days elapsed since 1 Jan. 4713 BC, the date derived by Joseph Justus. In the case of the 30th anniversary of the air date for the original series (8 Sept. 1996), that's 2,450,335 days. To make it easier, astronomers only use the last five digits – making 50335 the Julian date for the Star Trek anniversary. For Star Trek, Roddenberry added a single digit after the decimal point (50335.2) to represent one of the 10 time measurements in a 24-hour period... Roddenberry borrowed the five-digit Julian date, shortening it to four digits and renaming it "stardate." Not a precise measurement of each episode’s time frame, the stardate was simply a reminder that the series was set in the future. (Star Trek 30 Years Special Collector's Edition, 1996, p.81)

Like a lot of promotional material related to Star Trek, this account gives complete credit to series creator Gene Roddenberry, but a little research suggests that the truth of the matter is more complicated.


According to biographer Joel Engel, when Roddenberry wanted a futuristic way to measure time, he called writer Samuel Peeples.  Peeples had been a consultant on 'The Menagerie' and wrote the second pilot which sold the series:

The two men had a few drinks while brainstorming, and soon began chuckling over their imaginative 'stardate' computations. 'We tried to set up a system that would be unidentifiable unless you knew how we did it,' Peeples says.

They marked off sections on a pictorial depiction of the known universe and extrapolated how much earth time would elapse when traveling between given points, taking into account that the 's warp engines would be violating Einstein's theory that nothing could exceed the speed of light. They concluded that the 'time continuum' would therefore vary from place to place, and that earth time may actually be lost in travel. 'So the stardate on Earth would be one thing, but the stardate on Alpha Centauri would be different,' Peeples says. 'We thought this was hilarious, because everyone would say, 'How come this date is before that date when this show is after that show?' The answer was because you were in a different sector of the universe.'

Whether or not you accept Peeple's account, one thing's for certain: the stardate system doesn't appear in Roddenberry's final draft of 'The Menagerie' (dated November 20, 1964), nor does it appear in the finished episode. The first time the familiar dating system does appear is in Samuel Peeple's first draft of 'Where No Man Has Gone Before,' dated May 27, 1965: 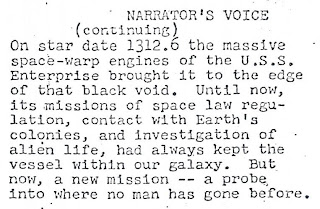 The script went through a number of revisions, first by Peeples and then by Roddenberry, but the stardate system as established in that first draft was relatively unchanged by the time the 'final draft' of the teleplay, dated July 8, 1965 (some additional revisions would occur after this date):

The script originally had dates in it like 2362, and months, and days. I thought that sounded a little awkward for the twenty-third, twenty-second century, so I thought that there should be another dating system.  So I checked, that, yes, astronomer's had a way of dating called [the] Julian Day System.

With respect to the plethora of contributions he and his firm made to Star Trek, in this case the passage of thirty-three years appears to have clouded Mr. de Forest's memory. After reading the first draft of the script, as well as the July 14, 1965 de Forest Research report for the episode, it's obvious that 'Where No Man Has Gone Before' never utilized a conventional dating scheme. However, the archival evidence does indicate that the Julian day system was recommended by de Forest Research (and not Roddenberry, as the magazine I quoted earlier stated). There are two comments from the de Forest Research report for the second pilot addressing the use of stardates:


(Page 2, Scene 3)
But on star date 1312.4 – Astronomers already have adopted a method of dating which makes possible the counting of the number of days elapsed between widely separated observations called 'the Julian Day'. Today July 14, 1965 is 2,438,956 in Julian days.  A Julian cycle is 7,980 years, and the Julian day measurement would be scientifically authentic. Suggest “on Julian B 1312.4”.  This date would be August 5, 3271.

Although de Forest Research made many script comments that were incorporated into the program, these suggestions were ignored. Roddenberry chose to stick to the stardate terminology rather than name-check the Julian day, and the confusing gravestone markings in the script can be seen on the prop in the finished episode.


de Forest Research would reference the Julian day in their research reports for three early first season episodes ('The Corbomite Maneuver,' 'What Are Little Girls Made of?' and 'Dagger of the Mind'), but their attempts to get stardates to match the real-life dating system were eventually abandoned. By the end of the first season, their efforts concerning stardates dealt with three issues: stardates that didn't match the numbering scheme of each season, stardates that weren't numbered sequentially within a script, and stardates that directly conflicted with other episodes. Getting stardates to be progress sequentially from episode to episode was a lost cause, since episodes were often aired out of production order.  An explanation to this problem, similar to the one Samuel Peeples recalled in his interview with Joel Engel, can be found in the Star Trek Guide for potential writers:

Thanks to TrekBBS user Sir Rhosis for the 'Where No Man Has Gone Before' script excerpts. His script reviews for the original series at Orion Press have been an invaluable resource and come highly recommended.

Gene Roddenberry: The Myth and the Man Behind Star Trek (Joel Engel, 1994)