For years, a rumor has been circulated among Star Trek fans that the infamous third season premiere 'Spock's Brain' was originally crafted as a comedy in the vein of 'The Trouble with Tribbles,' 'I, Mudd,' and 'A Piece of the Action,' only to be gutted when Fred Freiberger arrived as the show's new producer, believing that the series should be played straight. Over the years, this rumor has been brought up in public discussion groups, online reviews of the episode, and been the topic of conversation at various Star Trek conventions (I first learned of the story during a Scott Mantz slide show at a convention in Portland, Oregon in the late 1990s).

Given the beleaguered reputation of the episode -- in 1989 it was the source of parody on an episode of The Wonder Years and in 2004 a word-for-word adaptation of the script became a successful live comedy show -- it's unsurprising that Star Trek fans have been clinging to a behind-the-scenes rumor as a way of explaining the dramatic failings of the episode. Unfortunately, the Star Trek television series collection at UCLA make one thing abundantly clear: the long-standing rumor just isn't true. However the episode has been perceived since it first aired, it was never written with the intention of it being a comedy.

A February 1, 1968 letter from Gene Roddenberry to NBC Vice President Herbert Schlosser is the earliest document I've found to mention 'Spock's Brain,' which is listed as a story idea for a potential third season.  Roddenberry writes:

SPOCK'S BRAIN. -- Another promotable, topical item spinning off Sr. Christian Bernard's [sic] heart surgery and the intense public interest generated. This is a tale of Spock's brain being stolen to run a vast, complex planet computer. The bulk of our tale, and action search for Spock’s brain with the usual jeopardies, suspense, and mystery. The climax -- the effort by Dr. McCoy to replace the brain in Spock’s body.

Roddenberry's description of "the usual jeopardies, suspense, and mystery" sound far from comedic. However, this short description predates the delivery of Gene Coon's earliest story outline for the episode, which arrived a month later. Perhaps that's when the story became the basis for a comedy?

Although not an impossibility -- the writers report for the week of March 29, 1968 indicates Coon turned in a first draft story outline on March 12, 1968, a draft which is not present in the UCLA files -- I find this scenario unlikely. As described by Roddenberry's letter, the episode was meant to be played straight, and by the time Coon revised the outline (delivered on April 22, 1968) the tone of 'Spock's Brain' was deadly serious. Consider the brief, dramatic teaser of that revised outline: 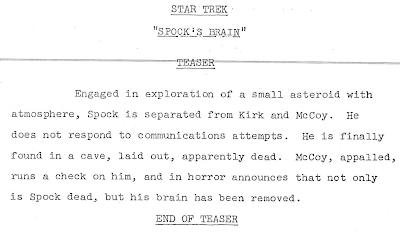 Except for a comedic scene between Kirk, Spock, and McCoy at the very end, the rest of this outline for 'Spock's Brain' remains as serious as the above teaser.

When Stanley Robertson, NBC's program manager for Star Trek, was sent this outline, he made several suggestions. In an April 25, 1968 letter sent to Fred Freiberger, Robertson asked the producer to "give further consideration to the addition of more personal jeopardy to our regular cast of heroes than is intimated here." Notably absent from this two page letter is any hint that the episode was intended as a comedy.

Given the consistently serious tone of each of these behind-the-scenes documents, and the completed episode itself, there's little doubt in my mind that 'Spock's Brain' was conceived from start to finish as a dramatic episode, not a comedy.

There's one other issue worth addressing here. I've seen it suggested in at least one review that Gene Coon used the pseudonym of Lee Cronin on this episode because he was unhappy with changes made to his script. That's simply not true. According to Bob Justman in Inside Star Trek: The Real Story, Gene Coon left Star Trek late in the second season for a more lucrative (and exclusive) contract with Universal Television. As a condition of being let out of his Star Trek contract, however, Coon agreed "to complete work on a number of his story premises if Star Trek was renewed for a third season." Since Coon had an exclusive contract with Universal Television, however, he couldn't use his real name. Therefore, all of Coon's third season efforts for Star Trek are credited to Lee Cronin, and he is even referred to as such in all behind-the-scenes documents for the third season.

Thanks to TrekBBS user Sir Rhosis for suggesting this topic and providing the 'Spock's Brain' outline excerpts. His script reviews for the original series at Orion Press continue to be an invaluable resource and come highly recommended.

If you have have a research question about Star Trek you'd like me to tackle, feel free to ask it in the comments field below. Time and resources permitting, it is my goal to answer as many reader questions as I can.