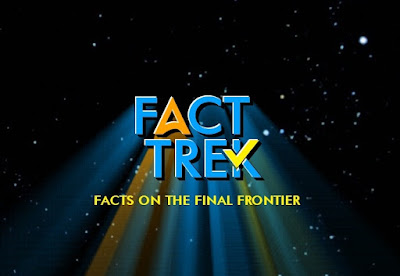 Seven years ago, I started STAR TREK FACT CHECK as a platform to debunk some of the most common myths and misconceptions about the making of Star Trek. I also wanted to share some of the more intriguing production documents I found as I continued to do archival research. In the process, I've been able to connect with a few people who worked on the show, along with dozens of like-minded fans and media historians.

One of those like-minded fans is Maurice Molyneaux, a talented writer and filmmaker who's name you might recognize from the pages of The Official Star Trek: The Next Generation Magazine or the credits of Star Trek: Deep Space Nine—Crossroads of Time. For the past two years, Maurice and I have been hard at work on an exciting new initiative we're calling FACT TREK.

What is FACT TREK? We have several projects in the works under the FACT TREK umbrella, but to start, we're launching a dedicated website and a Twitter feed where we are going to be sharing many of the little nuggets we've uncovered about the making of Star Trek and its place in television history. You can also follow us on Facebook.

Read our complete FACT TREK mission statement here.
Posted by Michael at 9:00 AM