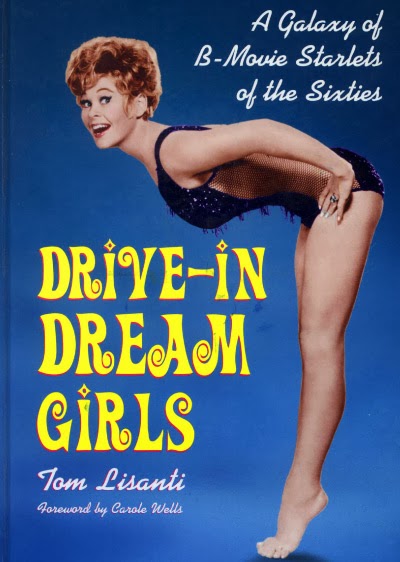 Tom Lisanti's Drive-In Dream Girls: A Galaxy of B-Movie Starlets of the Sixties (2012) will primarily be of interest to Star Trek fans for its interviews with Laurel Goodwin and Andrea Dromm, Grace Lee Whitney's predecessors in the role of the Captain's Yeoman in 'The Menagerie' and 'Where No Man Has Gone Before.' The two actresses have rarely been interviewed about their roles on Star Trek, and provide some valuable insight into their experiences on the show. That being said, the book includes a few inaccuracies and some faulty memories in the chapters devoted to these two actresses which should be corrected before they become part of the popular myth of the making of Star Trek.

For example, consider the following passage about Laurel Goodwin, who appeared as Yeoman Colt in the first pilot episode:

After the pilot was complete, it was shown to all three networks, who passed on it. NBC, though, thought it had potential, but they felt it was too surreal and that the audience would not accept a woman as second in command. NBC commissioned a second pilot. All the actors were dropped except for Leonard Nimoy and Goodwin. Two weeks before filming began, Goodwin learned that she too was being let go. 'I was not replaced--the role was just dropped. I was mad because I missed out on other work during the pilot season from the previous year.'

The phrasing here suggests that Desilu produced Star Trek and then tried to sell it to one of the three networks, but that's not what happened. Desilu knew going into Star Trek that the series would be an expensive venture (indeed, the final cost of 'The Menagerie' was $615,781.56), and couldn't have afforded the series pilot without the financial backing of one of the networks. Luckily, after CBS turned down the program, NBC decided gave Star Trek a pilot commitment. Although the end result wasn't what they were looking for, NBC saw enough potential that they agreed to finance a second pilot episode, which became 'Where No Man Has Gone Before.' It's unlikely that ABC or CBS were ever screened either pilot, since it was an NBC program from early on in the development process.

Moreover, the claim that NBC "would not accept a woman as second in command" has been disputed, most notably in Herb Solow and Bob Justman's Inside Star Trek: The Real Story (1996). Solow and Justman maintain that NBC were perfectly happy with a strong female lead -- they just didn't like Majel Barrett. Roddenberry, not wanting to re-cast the role he had written for his mistress, chose to drop Number One entirely -- although he would later blame the network for this decision.

The claim that "All the actors were dropped except for Leonard Nimoy and Goodwin" is simply false. None of the actors who worked on the first pilot had options for a second pilot in their contracts. When NBC ordered a second pilot rather than a series, the entire cast became free agents. Even Leonard Nimoy, who continued on with the series, had to negotiate a new contract, dated June 2, 1965 (read more about this in the post and comments here).

When it comes to Goodwin's statement that she wasn't told about being dropped from the series until two weeks before the second pilot went before the cameras (which would have been sometime in early July 1965, since photography of 'Where No Man Has Gone Before' commenced on July 19, 1965), I have to view this with some skepticism. Although Roddenberry was notorious for putting off the delivery of bad news, Colt had already been replaced by Yeoman Smith in the earliest teleplay of 'Where No Man Has Gone' Before (dated May 27, 1965).

Secondly, Goodwin's claim that she couldn't find work because of her commitment to Star Trek is at least partially incorrect. In the UCLA files there is an April 8, 1965 letter from Goodwin's agent to Ed Perlstein at Desilu which establishes terms in which Desilu agreed to take "second position" to Revue Studios (a subsidiary of Universal) while Goodwin auditioned for a Revue pilot. Goodwin didn't get the part (an unspecified role on the series Tammy, which was broadcast for one season from 1965-66), but that shouldn't be blamed on Star Trek.

The chapter on Andrea Dromm has less to say about Star Trek, and only one claim worth examining here. Explaining why she didn't stick with the series, the book offers the following:


The character of Yeoman Smith was to become a regular on the series, but Dromm passed on it. Explaining her decision, Andrea Dromm says matter-of-factly, 'I was offered a role in The Russians Are Coming, The Russians Are Coming. They told me that you either do the film or the series. I chose the film, but if I had known that Star Trek would become such a phenomenon, I probably would have opted for the series.'

It's been nearly fifty years, so it's possible Dromm's memory is a bit fuzzy, but her account doesn't line up with the archival record. The following excerpt (dated April 11, 1966) of a letter from Roddenberry to Dromm (via her agent) can be found in the Roddenberry collection at UCLA:


Due to changes in format, budget structure, and character concepts, we cannot pick up a number of options, including yours. But we do hope that "Yeoman Smith" will reappear in future stories and hope we will be fortunate enough to find you interested and available at that time.

Roddenberry's suggestion that Yeoman Smith might appear in future stories was probably an empty gesture. He used the same boilerplate languages in the letters releasing Paul Fix and James Doohan from their contracts, which were sent on the same day (read more about James Doohan's fight to stay on Star Trek here).

Despite these mistakes, this post should not be interpreted too negatively. Lisanti's book presents interviews with a number of actresses who have never been asked to speak about their careers in detail. Laurel Goodwin's account of Majel Barrett's on-set relationship with Gene Roddenberry and Andrea Dromm's appraisal of the executive producer (which contradicts James Goldstone's account, from Inside Star Trek: The Real Story, that Gene Roddenberry only cast Dromm because he wanted to "score" with her) will be of interest to any Star Trek fans who want to know more about the production history of the series. Additionally, other actresses who appeared on the program, including Angelique Pettyjohn ('Gamesters of Triskelion'), Arlene Martel ('Amok Time'), Venita Wolf ('The Squire of Gothos'), Beverly Washburn ('The Deadly Years'), Sharyn Hillyer ('A Piece of the Action'), and Valora Noland ('Patterns of Force') are profiled by the book as well.

Author's Note: I recently signed on as a contributor to the pop culture website What Culture. My first post (a Star Trek-themed list, of course) is now online. Don't worry, though -- I'm not about to abandon Star Trek Fact Check. In fact, real life permitting, my research for this year is just getting started. Be seeing you.

Drive-In Dream Girls: A Galaxy of B-Movie Starlets of the Sixties (Tom Lisanti, 2012)
Posted by Michael at 5:39 PM